On a recent trip around Europe, I passed an old-fashioned newsstand with newspapers displayed outside. They all featured bold-faced headlines intended to catch your attention, even if only for fleeting moment. I couldn’t resist; I took a photo of two passersby who couldn’t resist the lure of those headlines.

With the slow death of newsprint, newsstands have become a rare sighting. Apparently in New York City only one out five has survived since the 1950s (according to Thrillist). This doesn’t mean that the news business is gone, but it has changed. The immense challenge that I see is that actual news gets lost in the bottomless sea of unprecedented NOISE. 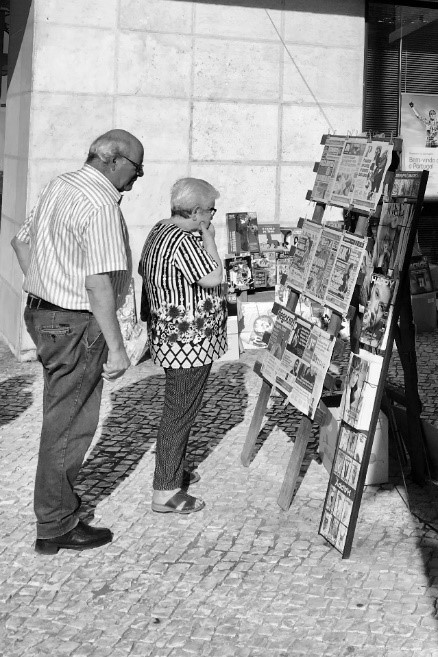 As investors, we are in the business of absorbing information, understanding the world, and drawing conclusions. Our goal is to deploy capital at the highest possible rate of return, while avoiding the risk of a permanent loss. We need to navigate around uncertainties in search of opportunities.  That mission can only be successfully fulfilled if we limit the excess noise, but leave room for the relevant news to reach us. The more distracted everyone else becomes, the more our patient and disciplined approach shines in comparison.

The sheer volume of information has increased very rapidly. 90% of all the data ever created was produced in the last two years, according to an IBM Marketing Cloud report that’s already three years old (Source: 10 Key Marketing Trends For 2017).

This may seem like a new phenomenon, but 50 years ago Nobel Prize-winning economist and cognitive psychologist Herbert Simon observed that “A wealth of information creates a poverty of attention.” We can only wonder what he would think of contemporary demands on attention in a culture in which, for example, 6,000 tweets appear every second. In the world of social media, everyone is a reporter with a potential audience of millions.

The Internet levels the playing field for content; a 50-page piece article that took six months to research and write and a tweet that took 30 seconds to write are seen, ranked, delivered, and read the same way. Actually, the tweet is more likely to be read than the 50-page report — who would have time for that?

And then there are pictures, worth a thousand words, as we’ve been told. They are also much less time-consuming to create than even the shortest tweet! I read in The Atlantic that we take almost 2 billion photos a day. Our times are probably the best-documented in the history of mankind.

It’s a good thing that all this information we create can travel quickly. Not long ago, news took days to cross the Atlantic. When Abraham Lincoln was assassinated on April 15th, 1865, the British press didn’t report his death until April 27th, 1865 when the ships had brought the news. Today, we know about everything more or less in real time, and even if a professional reporter is not on site, millions of smartphone holders are eager to snap a photo and share it with millions in a split second.

On one of my recent trips, technical problems at passport control in a major European capital led to an unbelievable line of very impatient tourists. Within minutes their phones were out, and photos were snapped. A positive side effect of that group photo session was a very prompt response from the authorities. Upon the appearance of a dozen additional immigration officers, the bottleneck disappeared.

Yet not all speed is equal… or even good, for that matter. A New Scientist article reports that fake news spreads six times faster than the truth.

Over a dozen years ago the Financial Times retold an old joke shared also by Warren Buffet on another occasion: about “a Texas oilman who dies, goes to heaven and is told by St Peter that, sorry, the oilmen’s wing is full. He tells St Peter he can make some room, pokes his head into the oilmen’s wing and yells, ‘Oil discovered in hell!’ The room empties as the oilmen chase the rumor. The Texan heads toward hell as well, causing a surprised St Peter to ask, ‘where are you going?’ The oilman replies, ‘There might be something to this rumor!’”

We all don’t mind or maybe even prefer a little lie. There might be some truth in it after all!

With the truncated news cycle, an increase in the speed of news, and proliferation of information sources, we have witnessed an unprecedented battle for eyeballs that favors the sensational. In a Medium post Tobias Rose-Stockwell explains how traditional journalism used to insist that events covered must be important and the reporting well-sourced. Only then would the news be sold to advertisers and distributed 1-2 times per day. In what Rose-Stockwell calls the “hyperbolic modern news” world, the first questions for the editor are whether an event could produce a headline that makes people click, and whether it comes with pictures or video. Then it’s sold to advertisers and distributed to readers 24 hours a day. 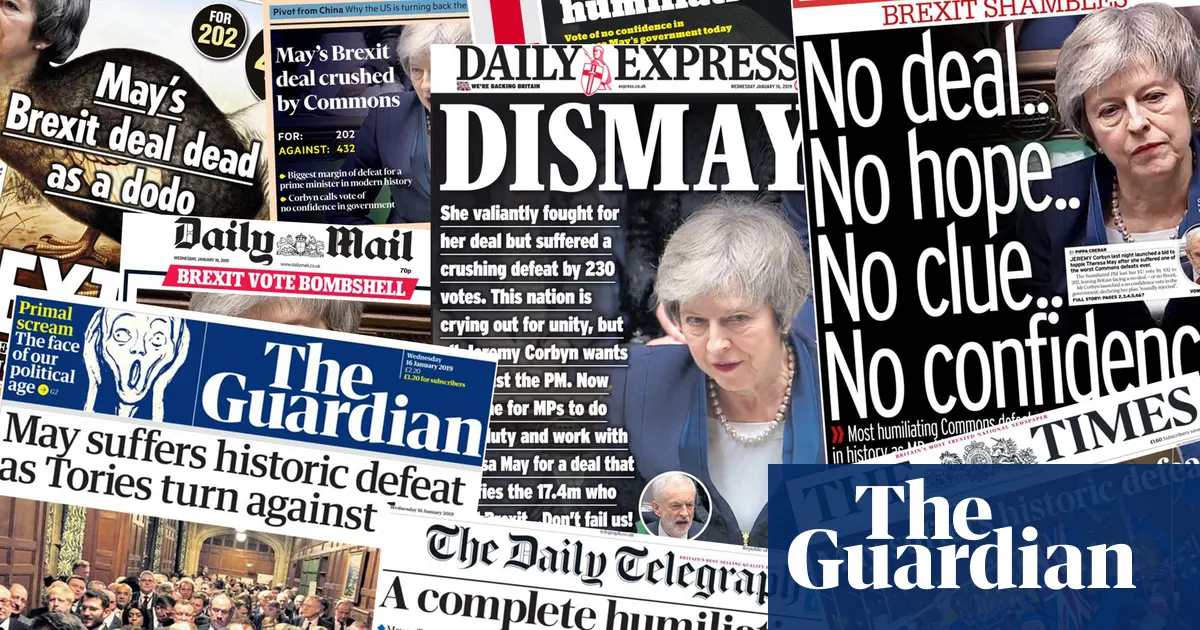 Rose-Stockwell goes on to analyze how the Ebola panic was created and fueled by the media: the image below sums up the process. “The physical damage done by the disease itself was small. The hysteria, however – traveling instantly across the internet – shuttered schools, grounded flights, and terrified the nation.” He concludes: “The terror was far more contagious than the virus itself.” 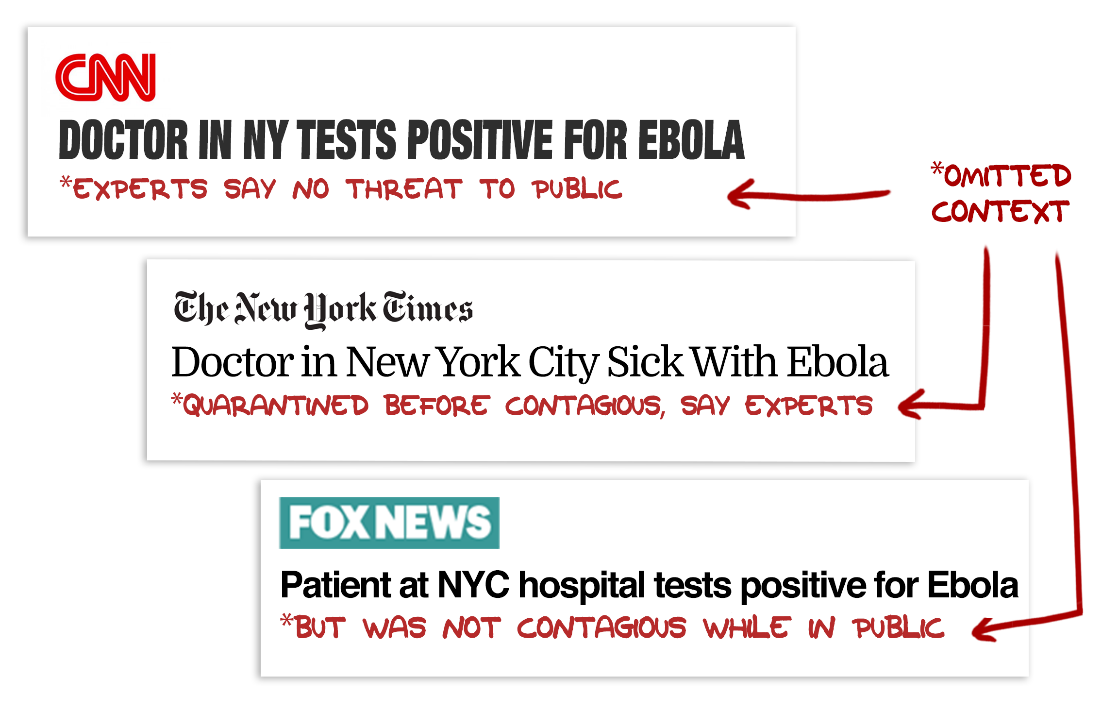 As everyone is fighting for our attention at the expense of the credibility of the news, and honesty of reporting, we become skeptical. A 2018 RAND Corporation report by Jennifer Kavanagh and Michael D. Rich sheds light on how  the public is losing trust in facts as the lines between  anecdotal and empirical evidence dissolve. The authors conclude: “The most damaging effects might be the erosion of civil discourse, political paralysis, alienation and disengagement of individuals from political and civic institutions, and uncertainty about U.S. policy.”

In the case of the Ebola panic, there was a case of the illness in New York City — but that wasn’t the entire truth. The fact that the patient was neither contagious nor a threat to public health fell away from the narrative because the headline would have lost its attention-grabbing impact.

Today, we hear the term “fake news” used so commonly we could almost believe that no news is reliable. Michael Radutzky, a producer of CBS 60 Minutes, calls fake news “stories that are probably false, have enormous traction in the culture, and are consumed by millions.”

I grew up in 1980s Poland where we were fed a regular diet of fake news through government propaganda, which praised communism and its successes while the gray reality outside the window painted a strikingly different picture. Mis-information, dis-information, or mal-information are not new inventions. When my parents took me to Egypt as a teenager. I remember the beautiful depictions of a supposedly victorious battle fought in 1274 BC at the city of Kadesh by one of the most powerful pharaohs, Ramses the Great. It was not only the largest chariot battle ever fought, but also the best-documented battle in all of ancient history.

And yet historians will tell you that the battle was not a victory; the Egyptians didn’t even attempt to capture Kadesh and retreated south instead. The conflict was settled by a peace treaty, the first one recorded in our history. Today, that development seems like the real news headline.

Glass half full or a glass half empty

The summer interns in our office are always eager to share the news they read during their morning commute and its relevance to our business. I am a disappointing audience to them because most of the time, I come across happily underinformed. I always ask them if it is noise or news… that gets them thinking, and before they even have a chance to answer, I follow up with another question – is it good or bad?

I tell them if a stock of a company we would like to buy drops 50% in a few months, for reasons that have nothing to do with the health of the underlying business (but that frightens away other potential investors) isn’t that good news in disguise? It’s an opportunity for us to invest!

I further explain that we search out those opportunities, and we tend to find them where others aren’t looking. We also feel comfortable waiting longer than others to buy, and to sell. We let noise work in our favor!

In today’s world, there are times when I think we have to consciously take steps to ignore or even hide from the endless noise of our culture. Last year, I had the wonderful opportunity to speak to a group of investors from around the world at an intimate mountaintop hotel overlooking Zurich. It was warm foggy morning, we couldn’t see much out the windows, and nothing competed with me for the attention of my audience. I took a bit of a gamble and chose a topic I don’t hear discussed much among investors – the need to unplug, disconnect, and go on an information diet.

I told them the story about my experience of the first week after I left my job of over 11 years to start Sicart Associates with my three partners. I had no work phone, no email, no stock prices — yet I still think I did some of the best work I have ever done that week because I had no distractions. That week taught me more than a decade of investing, and set me on a new path: as a remote investor, connected, but keeping a healthy distance. After the talk, a dozen attendees approached me with their own stories, experiences, and tactics. I realized that I wasn’t the only one.

Today, I don’t have news alerts on my phone and there are days when I don’t even check stock prices or headlines. I’ve deleted most of my news and social media apps from my phone. Instead I devote myself to longer-form learning: I read books on my Kindle and seek out podcasts featuring interesting people so I have something to listen to on my daily commute. You are more likely to catch me reading a 1990s Coca-Cola annual report than a vivid commentary and discussion of the hottest tweet of the day. I’ve come to believe that the longer it took an author to produce a piece of content, the more attention it deserves.

Any serious investor knows that daily stock price movements have no bearing on the long-term performance of their holdings. Over half a century ago, Benjamin Graham, the father of value investing, said: “In the short run, the market is a voting machine but in the long run, it is a weighing machine.” These days long-term investing might be out of fashion, but in my view the more distracted everyone else is, the more our focus, discipline and patience matter.

Noise means volatility, with prices moving up and down for short-lived reasons. That’s a buying opportunity for those who keep their eyes on the horizon, filter out the noise, and analyze the news. We all have a limited amount of attention so let’s use it wisely. Not all information is news, not all news is real, and even less actually matters.